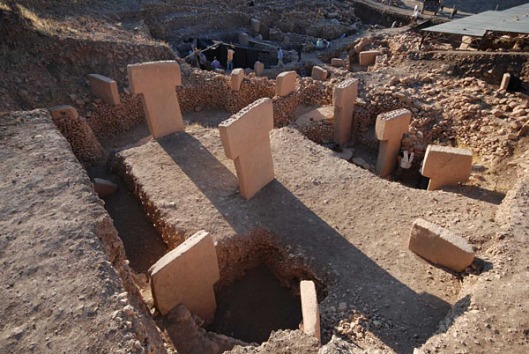 The eerie stones turned out to be the flat oblong tops of awesome megaliths. These T-shaped ochre stones loom abruptly from the exhausted earth. Most of them are carved with bizarre and delicate images – mainly of animals and birds. One image is a sexualised representation of a woman. Sinuous serpents are another common motif. The stones themselves seem to represent men – some have stylised ‘arms’, which angle down their sides.

There are indications that more is to come. A few years ago, Schmidt and his team found a very weathered, half-quarried, T-shaped stone lying in a limestone bed, 1km (0.6 miles) from the main site. This enormous stone is 9m (30ft) long, and was, it seems, designed to join the other pillars at Gobekli. “The stone is cracked, so it must have broken,” Schmidt explains. “When this happened the builders probably left it and started on another.”

So far, so remarkable – and if this were all there was to Gobekli Tepe, it would already be a dazzling site: a Turkish Stonehenge, or a Kurdish Carnac. But Gobekli Tepe isn’t just this. One unique factor puts it in the archæological stratosphere.

Gobekli Tepe is staggeringly ancient. Carbon dating of organic matter adhering to the megaliths shows that the complex is 12,000 years old. That is to say, it was built around 10,000–9,000 BC. By comparison, Stonehenge was built around 2,000–2,500 BC. Prior to the discovery and dating of Gobekli Tepe, the most ancient megalithic complex was thought to be in Malta, dated around 3,500BC.

Gobekli Tepe is thus the oldest such site in the world, and by a considerable margin. In fact, it’s so stupefyingly old that it actually predates settled human life. It is also pre-pottery. Gobekli Tepe hails from a part of human history that is unimaginably distant, right back in our hunter-gatherer past.

This revelation – that early Neolithic hunter-gatherers could have built something like Gobekli – is world-changing. Hitherto, it was presumed that agriculture necessarily preceded civilisation, and that complex art, society and architecture depended on the reliable food supplies derived from farming. Gobekli Tepe shows that the old hunter-gatherer life, at least in this region of Turkey, was far more advanced than was ever conceived.

Our tea-glasses are empty. We leave the calm of the open tents, and return to the dust and hubbub of the dig. Looking at the circles of enigmatic stones, and their exquisite carvings of lions and boars, it is easy to believe the theory that Gobekli Tepe is a temple dedicated to the hunting lifestyle. What is less easy to believe is the idea that this region of Turkey, these dusty brown hills all around us, once supported a large ‘civilisation’ of hunter-gatherers. Indeed, it is hard to believe that this semi-desert once supported enough animals to justify any hunting at all. 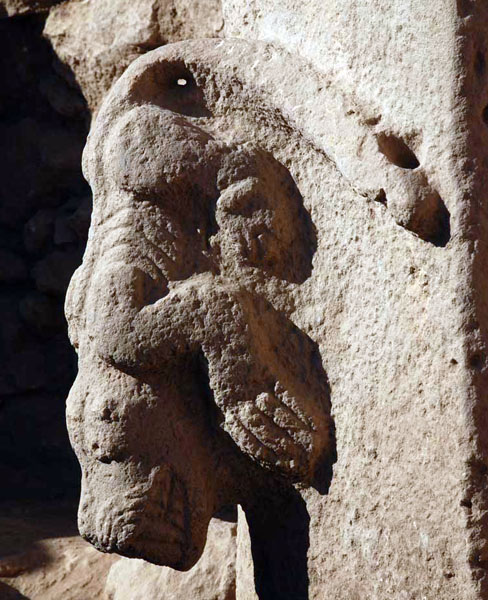 Gazing across the arid hilltops, Klaus Schmidt explains: “It wasn’t always like this. We know from remains of animals and plants that this was once a rich region, ecologically speaking. There were dozens of mammal species, green meadows and woods. The climate was wetter and lusher, but still warm. The herds of game were enormous. A paradisical place.”

His eyes are twinkling as he says this. We are approaching the extraordinary connection with the Eden story.

But before we get there, an obvious question is posed. What happened to the landscape? Why is the region now so eroded and barren, if it was once so lush and Edenic?

Schmidt picks up a knapped piece of flint from the weary earth. There are thousands of flint pieces – man-made – littering these hills. He says: “To build such a place as this, the hunters must have joined together, in great numbers. After they finished building, they probably congregated for worship, and for funerals. But then they found that they couldn’t feed so many people with the game. So I think they began cultivating the grasses on the hills. Einkorn wheat, a forerunner of domestic wheat, grows wild here. So they domesticated it.” Schmidt looks at the solitary mulberry tree on the hill. “In other words, they began farming to support their religious community. But it was the farming that maybe caused their downfall.” 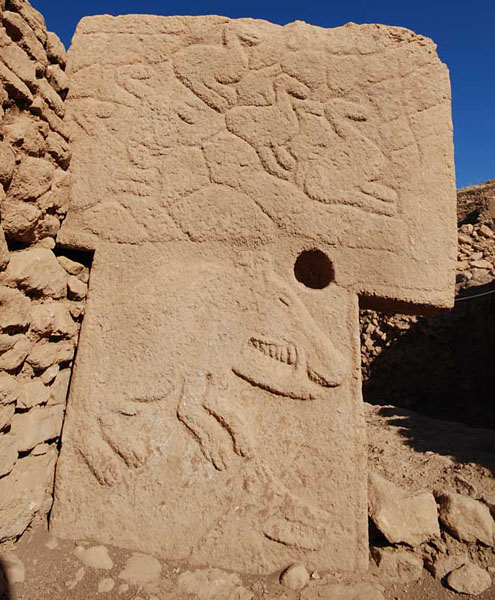 According to Schmidt, it seems that agriculture began here, in the province immediately surrounding Gobekli, sometime around 8,000BC.

This indeed was one of the very first places in the world where people farmed. We know roughly when and where farming began, because of the archæological evidence: domestication is a shock to the physiology of man and beast. The skeletons of people change, they temporarily grow smaller and less healthy, as the human body adapts to a protein-poorer diet and a more arduous lifestyle. Likewise, newly domesticated animals get scrawnier at first.

But 8,000 BC, it seems, was also the time when the local landscape began to alter. As the trees were chopped down, and the soil leached away, the area became arid and bare. What was once a glorious pastoral region of forests and meadows, rich with game and wild grasses, became a toilsome place that had to be worked ever harder.

Schmidt and I descend a ladder to the floor of the dig, where the ancient dust is banked against the T-stones. He continues: “The really strange thing is that in 8,000 BC, during the shift to agriculture, Gobekli Tepe was buried. I mean deliberately – not in a mudslide. For some reason the hunters, or the ex-hunters, decided to entomb the entire site in soil. The earth we are removing from the stones was put here by man himself: all these hills are artificial.”

The link is becoming irresistible: a lost paradise, a forsaken lifestyle, a terrible ‘mistake’, even a solitary tree. Could there really be a connection between Gobekli Tepe and the Garden of Eden story?

”Organization of the Islamic Conference. The OIC has 57 member states”

History in the Remaking

The site isn’t just old, it redefines old: the temple was built 11,500 years ago—a staggering 7,000 years before the Great Pyramid, and more than 6,000 years before Stonehenge first took shape. The ruins are so early that they predate villages, pottery, domesticated animals, and even agriculture—the first embers of civilization. In fact, Schmidt thinks the temple itself, built after the end of the last Ice Age by hunter-gatherers, became that ember—the spark that launched mankind toward farming, urban life, and all that followed.

All the circles feature massive T-shaped pillars [THE HEADLESS CROSS!!!!] that evoke the monoliths of Easter Island.

The new discoveries are finally beginning to reshape the slow-moving consensus of archeology. Göbekli Tepe is ”unbelievably big and amazing, at a ridiculously early date,” according to Ian Hodder, director of Stanford’s archeology program.

Schmidt’s thesis is simple and bold: it was the urge to worship that brought mankind together in the very first urban conglomerations. The need to build and maintain this temple, he says, drove the builders to seek stable food sources, like grains and animals that could be domesticated, and then to settle down to guard their new way of life. The temple begat the city.

This theory reverses a standard chronology of human origins, in which primitive man went through a ”Neolithic revolution” 10,000 to 12,000 years ago. In the old model, shepherds and farmers appeared first, and then created pottery, villages, cities, specialized labor, kings, writing, art, and—somewhere on the way to the airplane—organized religion. As far back as Jean-Jacques Rousseau, thinkers have argued that the social compact of cities came first, and only then the ”high” religions with their great temples, a paradigm still taught in American high schools.

Religion now appears so early in civilized life—earlier than civilized life, if Schmidt is correct—that some think it may be less a product of culture than a cause of it, less a revelation than a genetic inheritance.

The temples thus offer unexpected proof that mankind emerged from the 140,000-year reign of hunter-gatherers with a ready vocabulary of spiritual imagery, and capable of huge logistical, economic, and political efforts.

”Lesch–Nyhan syndrome (LNS), also known as Nyhan’s syndrome, Kelley-Seegmiller syndrome and Juvenile gout[1]:546, is a rare, inherited disorder caused by a deficiency of the enzyme hypoxanthine-guanine phosphoribosyltransferase (HGPRT), produced by mutations in the HPRT gene.”

”The uncontrollable self-injury associated with LNS also usually begins at three years of age. The self-injury begins with biting of the lips and tongue; as the disease progresses, affected individuals frequently develop finger biting and head banging. The self-injury can increase during times of stress. Self-mutilation is a distinguishing characteristic of the disease and is apparent in 85% of affected males.

The majority of individuals are cognitively impaired, which is sometimes difficult to distinguish from other symptoms because of the behavioral disturbances and motor deficits associated with the syndrome. In many ways, the behaviors may be seen as a psychological extension of the compulsion to cause self-injury: Rejecting desired treats or travel, repaying kindness with coldness or rage, failing to answer test questions correctly despite study and a desire to succeed, provoking anger from caregivers when affection is desired, and so on.

”Lesch-Nyhan syndrome causes compulsive self-mutilation. Children eat their lips or fingers, and stab their faces with sharp objects. They feel the pain, but they cannot stop themselves.”

”Sweden’s reputation as a tolerant, liberal nation is being threatened by a steep rise in anti-Semitic hate crimes in the city of Malmo.”

”A million library books to be sent down the mines”

”ONE million books from Manchester’s Central Library – including valuable volumes dating back to the 15th century – are to be put into temporarily storage with many going deep underground in the Cheshire salt mines.”

”Central Library will re-open in 2013 with a new state-of-the-art lending library..”

A major diplomatic and political scandal is erupting that could have significant import for French-American relations. It involves new research into the mysterious outbreak of ”mass insanity” in a village in southern France that affected some 500 people and resulted in five deaths.

Most voters believe we are living in broken Britain, according to a poll.

Nearly three fifths say they hardly recognise the country they are living in and are deeply pessimistic about the state of Britain today. 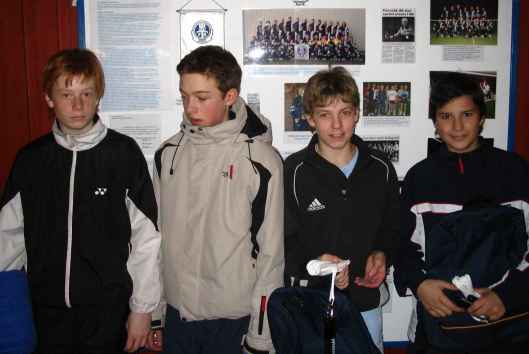 ”Leos are lucky this year as all the finance related problems will come to an end in the mid 2010. Job change is on cards. Prepare well for the interviews as a good job is awaiting you in may 2010.”

”Life begins at the end of your comfort zone.”